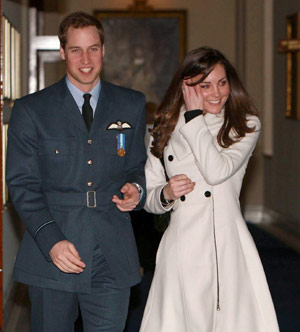 
Between 0815 and 0945: The vast majority of the 1,900 guests will arrive at the Great North Door of Westminster Abbey ahead of the 11am service. Order of Service in full

From 0950: Governors-general and prime ministers of realm countries, the Diplomatic Corps, and other distinguished guests arrive at the Abbey.

1020: Members of foreign royal families arrive at the Abbey from Buckingham Palace.

1020: Kate Middleton's mother Carole Middleton and brother James Middleton leave the Goring Hotel for the Abbey. They arrive at the Abbey at 1027. Gallery: who's who in the Middletons

1025: Members of the Royal Family (except those listed below) leave Buckingham Palace for the Abbey, arriving at 1030. Gallery: who's who in the House of Windsor

1035: The following members of the Royal Family leave Buckingham Palace for the Abbey, arriving at 1040: The Duke of York, Princess Beatrice, Princess Eugenie, The Earl and Countess of Wessex, The Princess Royal and Vice Admiral Timothy Laurence.

1038: The Prince of Wales and Duchess of Cornwall leave Clarence House, arriving at the Abbey at 1042.

1040: The Queen and the Duke of Edinburgh leave Buckingham Palace, arriving at the Abbey at 1045.

1051: The bride and her father Michael Middleton leave the Goring Hotel for Westminster Abbey in a Rolls Royce

1100: The marriage service begins and is relayed by speakers along the route. There will also be big screens in Hyde Park and Trafalgar Square. Royal wedding parties and events

1240: Members of the Royal Family and members of foreign royal families arrive at Buckingham Palace.

From 1240: Other guests for the reception arrive at Buckingham Palace.

1325: The Queen and the bride and groom, together with their families, appear on the balcony.

1330: Fly-past by the Royal Air Force and Battle of Britain Memorial Flight.

The Queen will give a lunchtime reception at Buckingham Palace, which will be a private gathering for guests drawn from the congregation who will represent the couple’s official and private lives. During the reception, the couple will appear on the Buckingham Palace balcony with other members of the Royal family. The Reception is expected to finish mid-afternoon and guests will be served with canapés.

At some point in the afternoon, the bride and groom will leave Buckingham Palace for some downtime at St James's Palace.

In the evening, the Prince of Wales will give a private dinner, followed by dancing, at Buckingham Palace for the couple and their close friends and family.

Price William and Kate Middleton marry in greatest of splendor, pomp and pageantry. Loyalists of the English Royal Family and have been waiting for this moment with great anticipation. There was a long wait since signs of a brief romance were noticed some time back in college until today where both will take the plunge in Royal Fashion.

British citizens from all over England including other foreign well wishers have already found themselves suitable spaces on the streets of Westminster Abbey to witness a spectacular wedding ceremony. Literally millions upon millions will leave every thing aside and be glued to their TV’s. It is a family event, a special treat. The photographers covering the event with their latest professional CANON cameras and other pieces of recording equipment would have taken billions of photographs without exaggeration by the time the entire proceedings are completed.

Among the spectators are TV Station crews and news reporters hoping to take back digital reports of the ‘wedding of the decade’ which will be instantaneously transmitted and aired on their respective channels in their own countries.

What are the people really looking forward to? What are the common expectations?
‘White on White, Kate is getting married today.’
Talk about wedding gowns. Yes! All the young-brides-to-be and fashion designers will be watching and recording every stitch of clothing that will be paraded on the streets of Westminster Abbey. It intrigues every one. Even the closest of friends of the royal family have not been privy to this information. But one can use the imagination and try and anticipate the most sensational outfits and grandeur humanly possible.

There is already a ruse that a Sri Lankan Blue Sapphire signet ring is going to be worn by Kate and there are also many other stories coming from perennial times about associations between the old ‘Ceylon’ and the ‘Royal Family’. Our local lackluster precious stone businesses are taking advantageous of the smallest of these associations and marketing it with all possible ingenuity. After all, there will be billions of orders for Sri Lankan precious stones post event. So these stones are with strings attached!

Anyway, we wish William and Kate all the best and happy married life.

Now comes the ultimate and burning question. What is in it for me? (WIIIFM)
Each spectator has his / her own reasons for watching the wedding ceremony and subsequent parading. For many, it is simply amusement. Others may try and learn something from it. For us Sri Lankan’s, except for a few Nayake’s and Wardena’s, we have not been born with the ‘silver spoon in our mouths’ as it were. We are down to earth Govi Gama or Udata Rata people or something else trying to eke out a living on the CSE to make ends meet. Hopefully, this event will give some forward momentum to the CSE ASI and MPI which was in the rather disappointing during the past few months accept a few manipulations.

To end this episode, I wish to recall the people’s princess Diana. What a great show on earth that wedding was. How fondly remembered she is by young and old alike. I recall the portion of the script in the movie ShreK. “Celebrity marriages never last long”. Hopefully, that would not be the case. I just read in today’s World News that the US has reported a drop in divorces in the years 2008 and 2009. Not due to a new morality improvement. It was decisively due to the solvency issues that would arise from a divorce. So it proves the fact that marriages can last for the right reasons.

Disclaimer: This article is written just for your entertainment only and has no connotations of prejudice whatsoever.