» how do i know my ipo application status ?
by Hitazz Today at 1:38 pm

» LOFC Direction
by Swissinvest Today at 10:09 am

» CLC - worth the Investment
by Swissinvest Today at 9:57 am

FINANCIAL CHRONICLE™ » CORPORATE CHRONICLE™ » ASI will reach to it's ever high due to all the positive economic achievements ....
Tweet

ASI will reach to it's ever high due to all the positive economic achievements ....

>GSP+ Will regain within 2 weeks

>Foreign inflow through out the period


The biggest risk in life is not taking any risk at all.

But present picture of this forum shows negative sentiments

they are waiting to break 6700 level. then officially Bull trend.

they are waiting to break 6700 level. then officially Bull trend.

Resistance can be broken at will.There's lot of options for that.Matter of pressing keyboard buttons.

At this stage the government should focus on tight fiscal management until the pressure on low reserves level is over. Wastage, corruptions are to be minimized while promoting export oriented programs.
Nonetheless, opposition support to come out of this critical occasion is vitally necessary to build up the economy where capital market irresistibly booms. 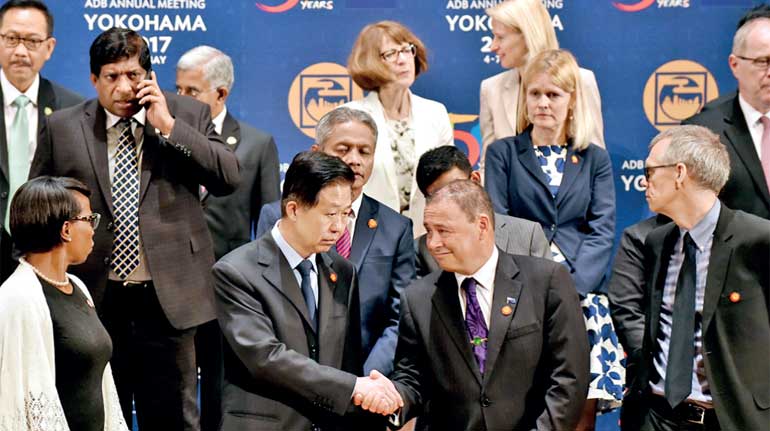 [size][size]
Charumini de Silva reporting from Yokohama, Japan
As promised by Asian Development Bank (ADB) President Takehiko Nakao during his visit to Sri Lanka last year, the bank yesterday confirmed that it has doubled its lending capacity to $ 800 million this year.

“Sri Lanka’s annual allocation was around $ 400 million per year and this year it has been increased to $ 800 million. We have just doubled the lending. This is the highest we have allocated to the country,” ADB South Asia Department Director General Hun Kim said at a media briefing held on the sidelines of the 50th ADB Annual Meeting in Yokohama, Japan.

“Sri Lanka already has quality infrastructure, it just needs to have advanced infrastructure, which could fast-track the next phase of development of the economy,” he added.

However, he pointed out that transportation remained a key challenge in Sri Lanka’s development process, asserting that ADB was currently collaborating with the Sri Lankan Government on developing a railway master plan, which is scheduled to commence next year with a funding facility of over $ 1 billion.

“As an infrastructure development bank, ADB is more into bigger and national level development in the country. The first phase of the railway master plan will be around $ 300 million, which will commence next year,” he added.

While commending Sri Lanka for its efforts in power generation, he said that there are concerns over the stability of power in the long term, and that ADB was keen on supporting Sri Lanka on renewable energy projects in the future.

“Depending on the project readiness, ADB is ready to fund infrastructure development in Sri Lanka,” he said, adding that Sri Lanka was one of the countries which had benefited the most and was the fastest to receive funds from ADB.

Stating that foreign direct investment (FDI) was a key driver of growth in South East Asia, Kim said that Sri Lanka has the scope to attract more FDIs.

“Except India, FDIs in other countries in South Asia are low. FDI and exports are two areas where Sri Lanka has an opportunity to gather faster economic growth,” he stated.

In addition, he said that ADB has commenced a rural road development program worth $ 1 billion, which will help Sri Lanka to connect every small village. ADB is also working on capital market development to mobilise more funds towards the economy.

Speaking at a business session with governors at the 50th ADB Annual Meeting in Yokohama, Japan, he pointed out that untapped financial resources in the Eurozone and other countries where very low interest rate regimes were prevailing could be effectively mobilised to develop infrastructure in middle-income countries which can offer attractive margins if acceptable risk minimisation instruments such as low-cost guarantees were available. While appreciating the outstanding contributions of the ADB with reference to the country partnership strategies and country operations business plans over the past 50 years, Karunanayake said it has resulted in tremendous dividends over the years.

“Sri Lanka’s economy has shown tremendous resilience in the past, countering many adverse situations and our strategy to improve growth and dilute the debt servicing cost will ensure a noteworthy contribution towards the expected evolution of the Asia and Pacific region,” he added.

He said a meagre 12% global GDP in Asia during the period of the inception of the ADB, swelling to almost one-third as at present and this century, could showcase the realisation of the projected 50% of the global GDP, heralding the dawn of an era of Asian economic domination.

“We will synergise with ADB in the noble effort to eradicate poverty from Sri Lanka,” he noted.

Highlighting the economic performance of Sri Lanka, he asserted that it recorded somewhat retarded growth last year due to adverse weather conditions, but the economy was now recovering to reach the envisaged economic objectives enumerated in the 2017 budgetary proposals.

“The ADB President was quite impressed with the progress we have made over the past two years. He extended their commitment and support further. The most important factor is that the disbursement has been made quicker, decision-making more effective and a sense of transparency has increased,” Karunanayake told the Daily FT after meeting the ADB President in Yokohama on the sidelines of the Annual Meeting.

Having said that, the Minister admitted that there were a few other areas that needed further improvement such as the Mahaweli Project.

“There was a delay in making some decisions over Mahaweli Section B, which is a water project. We will address this soon,” Karunanayake added.

He said that ADB also requested to help Sri Lanka as a knowledge bank.

“We requested them to communicate their know-how so that we don’t want to reinvent the wheel all over,” Finance Minister added.

In addition, on behalf of all member countries, the Minister has proposed that wealthy countries share their wealth with needy countries like Sri Lanka which could borrow it at a lower cost.

The Minister also said the ADB President has expressed his interest in visiting Sri Lanka in August or September this year.

high Officers Govt Treasury is manly responsible for this

they teach ministers to how to make money from ADB  projects

The right & power to interpret & apply the law vested at the hands of top people in past & current regime. As long as such loopholes are intentionally shielded misusing of national wealth smoothly prolongs.

Re: ASI will reach to it's ever high due to all the positive economic achievements ....

FINANCIAL CHRONICLE™ » CORPORATE CHRONICLE™ » ASI will reach to it's ever high due to all the positive economic achievements ....