» NEVER DISCARD & BRAND A STOCK AS CRAP
by samaritan Today at 1:26 pm

» Remember, you’re trading, not investing.
by thananjey Today at 12:48 pm

» Central Bank says economy on recovery path
by ONTHEMONEY Today at 11:34 am

» What are the websites available to get daily business news?l
by heroxhere Today at 10:53 am

» Outstanding October!
by heroxhere Today at 10:48 am

» Card Promotions in Sri Lanka by HNB
by kingraj1 Yesterday at 11:37 pm

» CINV half a billion profit
by Chithi Yesterday at 10:55 pm

@Mithooshan wrote:@Kipling - Any idea on CFLB it is going at a deep discounted price still and not recovered from what i understand ?

Apologies if it is not the right forum !

Plantation was the cancer for it. Now the interest is growing.

Posts : 450
Join date : 2019-12-06
Kavindu
As per March IR Nimal Perera built up position of 4mn++ shares in CFLB. Some who are collecting like one to believe he exited. I read in the good forum that a NP friend laughed & said NP has no reason to exit for profit of 16mn (4,000,000x4) as this is now chicken shit to him. I am told NP still adding to position. Please check & give invaluable view. Thanks.

@Kipling wrote:Kavindu
As per March IR Nimal Perera built up position of 4mn++ shares in CFLB. Some who are collecting like one to believe he exited. I read in the good forum that a NP friend laughed & said NP has no reason to exit for profit of 16mn (4,000,000x4) as this is now chicken shit to him. I am told NP still adding to position. Please check & give invaluable view. Thanks.

Ye actually CFLB is becoming attractive now. With the June IR the run will be started. More than 100% gain is possible within a year. Currently trading below 10/=

Posts : 450
Equity Stars : 788
Reputation : 36
Join date : 2019-12-06
Thanks Kavindu
I am hearing NP buying any quantity that comes to market. A broker told me NP target. 100% gain in 1 year is super conservative. They are looking at a massive gain which will be justified on fundamentals as plantations- cancer as you so correctly called it - now fully cured. 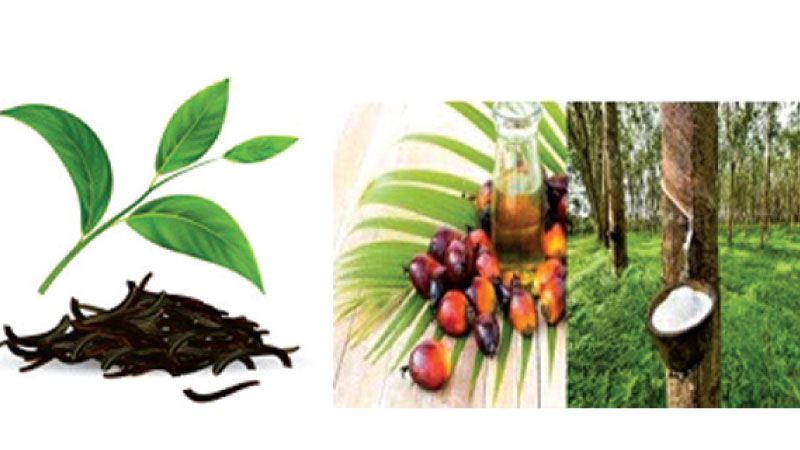 Increase in global demand for tea amidst a decline in global production (due to lockdown measures) is driving up prices stated SC Securities in their Plantation Sector update.
Between January to July 2020, Sri Lankan tea prices have gone up 6%, while cumulative tea production has declined by 15% YoY to 156.3 million Kg compared to 184.8 million Kg.
COVID 19 is also driving the global demand for rubber gloves. “Sri Lanka being one of the leading rubber glove producers, local demand for rubber is increasing fetching higher prices.”
The import ban on rubber-based products will boost the demand for domestically produced rubber products. Hence higher demand will attract higher prices for locally produced rubber.


The report, however, states that the decision banning new palm oil cultivations would negatively affect the palm oil industry. Sri Lanka’s Palm Oil Industry Association has appealed to reconsider the statement made by the President.


Raw rubber prices have already gained by nearly Rs.100 a kilo or 33% since July
Ban on rubber-based product imports likely to stay until local production increases
Ban on raw rubber imports unlikely as they aid local value addition and exports
Sri Lanka’s raw rubber prices, which remained depressed for many years, could see a rebound from the current import controls in place for rubber-based products, enhancing prospects for plantation companies and smallholders alike.


The government has restricted imports of rubber-based products, including tyres, as part of its broader curbs on non-essential imports, to contain the pressure on foreign exchange.


According to SC Securities, a subsidiary of Sampath Bank PLC, the import controls on rubber-based products could stay for some time, as the government is keen on providing assistance to local rubber-based producers, to ramp up their production.


For instance, the local tyre producers this week requested the government to continue with the current restrictions on two-wheeler and three-wheeler tyre imports,

citing they have adequate capacity to meet the local demand and could also produce for foreign markets, adding more jobs at home.


The prices of raw rubber have already gained in recent months, providing some relief to the battered regional plantation companies and the smallholders, with continuously depressed natural rubber prices remained for about eight years.


According to the auction prices available on the Rubber Research Institute of Sri Lanka website, the Latex Crepe 1X category, which averaged at Rs.275 a kilogramme on July 2, rose to Rs.335 a kilogramme, at the auction held on August 27.


In the most recent auction held on September 17, the price gained by a further Rs.30 a kilogramme to Rs.365.
However, these prices are far from their peak of nearly Rs.600 reached in 2012.


Nevertheless, these high prices remained only for two years, before declining to around Rs.200, which made the industry unsustainable and sent many smallholders out of production.


According to Planters’ Association (PA) of Sri Lanka Immediate Past President Sunil Poholiyadde, the regional plantation companies were forced to offer work, as they had a permanent workforce and harvest latex in order to keep the workers employed, even though the cost of production was much higher than the sales average at the auction.


The government last month said it was considering limiting imports of raw rubber used in local value-added industries, to encourage and promote local rubber cultivation and thereby afford the growers a higher price.


It has been proposed to look at a model for rubber imports, by matching the imports by a value-addition company with the amount of rubber it procures domestically.


The manufacturers and exporters of rubber products in Sri Lanka charged that a mafia of middlemen was trying to artificially manipulate the prices of raw rubber, by hoarding stocks and lobbying the government to control imports, so that their stocks could be sold at elevated prices.


SC Securities said such restriction on raw rubber imports is unlikely, as such imports are used for local value addition, which generates jobs and export earnings.