» Social Media Marketing in srilanka
by lankaspeaker Today at 2:02 pm

» Meditation and Investing
by ThilinaM Today at 2:00 pm

» Path to financial freedom - dont skip this
by ThilinaM Today at 1:57 pm

» Investment Advice
by ThilinaM Today at 8:47 am

» Calling Samaritan
by Kipling Today at 6:41 am

» Perpetual Treasuries to get a most of Treasury Bill-Bond Business of New Government?
by God Father Yesterday at 4:28 pm

» Forum - Reputation System
by ThilinaM Yesterday at 11:41 am

» Share of the year
by Eugine Fernando Yesterday at 8:18 am

» Short Term Targets
by liyanaarachchi Yesterday at 6:15 am

Who will win presidential election 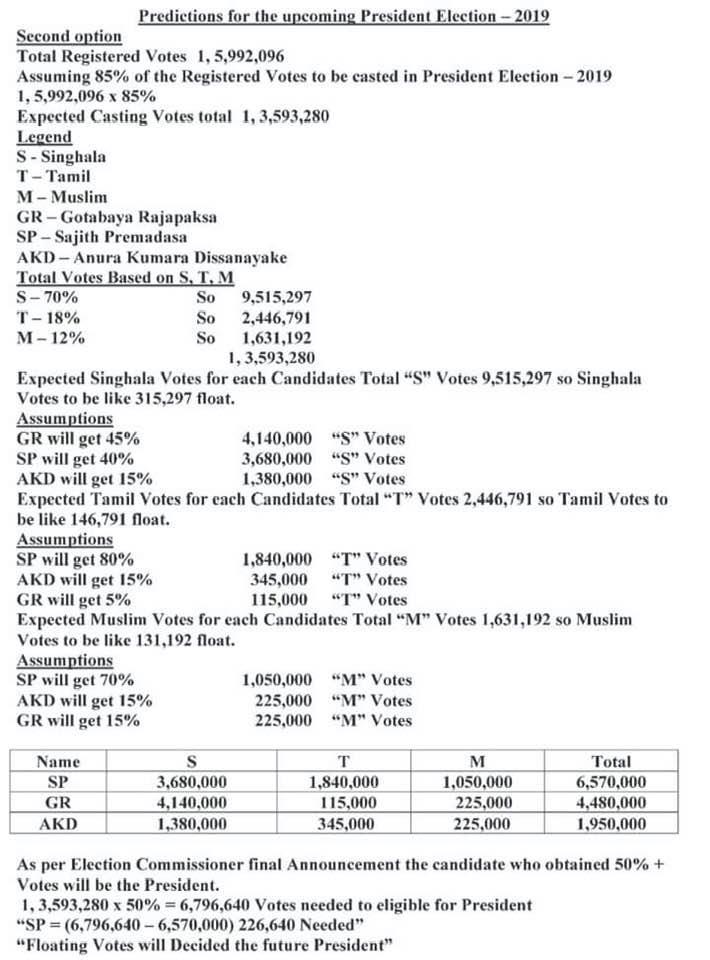 SP wants to be a white swan surrounded by black swans whose dossiers are highly questionable.

The term bellewether  referred to the ancient English practice of placing a metallic bell around the neck of a castrated ram (known as a wether) that led a flock of sheep. A shepherd could identify the flock movements by the tinkling of the bell. Even when the flock out of sight.
In modern usage, the term bellwether refers to an entity or individual that indicates trends in a larger system or collective.
For example, whichever candidate won the state of Ohio has won the presidency in all but two of 58 US Presidential Elections. Hence, states like Ohio, Florida (also two misses), Nevada, Missouri, New Mexico, and Tennessee (all with three misses) are known as “Bellwether states”.

Results: Moratuwa Polling Divisios
I could see no discernible pattern in the distribution of bellwether polling divisions across the country:

Results: Moratuwa Polling Division
Interestingly, the polling division with the second-lowest error (1.6%), Yatinuwara, in the Kandy Electoral District, is not a Perfect Bellwether, backing the losing candidate in 1988. However, its percentages have matched the island-wide result almost precisely in the last two presidential elections.

“Candidates should try to win all the Perfect Bellwethers.”

As we learnt, not only is the Polonnaruwa electoral district a bellwether, so are all three of its polling divisions. So is there something special about the ancient, former-capital of Sri Lanka? When it comes to presidential elections?
Probably not. And here’s why. We can divide our “history of presidential elections” into three groups:

Hence, it is not surprising that Polonnaruwa supported the winning candidate in every election.
[size=34]So who is going to win?[/size]
As usual, I’m going to utter my favourite phrase: “I don’t know”.
I also don’t know what the voters in our current perfect bellwethers (i.e. Moratuwa, Ratmalana, Ja-Ela, Katana, Mawathagama, Medirigiriya, Minneriya and Polonnaruwa) are thinking. But maybe you do.
If you go to Ratmalana, talk to a bunch of Ratmalaneans and find out that they are all supporting candidate X, you could make one of three conclusions:

@rukshan1234 wrote:VAT is going to reduce to 8%  good opportunity for construction  sector,,

Don't believe politicians promises in election period. By reducing and giving free how can run a government with a jumbo cabinet? with many own family members waiting for ministry. don't canvass by put a company name.

@rukshan1234 wrote:VAT is going to reduce to 8%  good opportunity for construction  sector,,

Since private sector is the heart of economy, it is good they promise VAT and income tax (Personnel) reductions. Then private sector will be more active and ultimately will bring more taxes than lost, when growth rates are higher. THAT IS SOMETHING MANGALA CANT UNDERSTAND.

Posts : 140
Equity Stars : 3040
Reputation : 3
Join date : 2012-02-14
Also it is good that GOTA is not making crazy promises like GOVT sector salary increases, which made 2015 UNP govt bankrupt and never recovered. If Private sector Turnover is increased by 100%, lost VAT can be recovered while if Profit is increased ( have to ) Income tax will be increased also. So increasing the economic activity through private sector is the only answer. So GOTA seem to know it, probbaly seen how US operates...

Posts : 1289
Equity Stars : 5743
Reputation : 45
Join date : 2011-02-20
Age : 42
Location : Nebraska
manufacturing sector has ruined like many other sectors due to the bad conduct of economy.
Sri lankan companies are trend to import goods (inferior quality)which can be manufactured (with height quality)here due to cost of production and higher government taxes.
Foe Ex lanka Walltile import tiles and sell them at their sales outlets ,since importation is more profitable than producing here.
When it come to personal income even medical reimbursements are taxed , medical fees ,wht tax

Posts : 104
Equity Stars : 350
Reputation : 5
Join date : 2019-09-06
Two of the country’s most prominent political figures are expected to take to the presidential election political stage in a decisive manner over the next two weeks, it is reported.
These two political leaders who are currently overseas and are said to be monitoring the country’s presidential operations and they are said to be obtaining analysis reports and information through trusted persons.
They are also said to be guiding their friends on who they should support and these two prominent figures are expected to join the presidential operations actively during the final two weeks leading up to the polls.

Posts : 104
Equity Stars : 350
Reputation : 5
Join date : 2019-09-06
Top post in the country E President. As a gentlemen style our former president JRJ, DBW and CBK after retirement they do politics but not came to parliament as a MP

@Gajaya wrote:One for sure is CBK but who is the other one?

@Gajaya wrote:One for sure is CBK but who is the other one?

CBK and ARJUNA now in SriLanka. I too thinking who they are

@samaritan wrote:Sajith can't even count on CBK's vote b'cos she may arrive at the polling booth after the voting time is over.

this analysis is complteley biased and baseless

@soileconomy wrote:Today is the day.today's results will be a good  guidance and indication  for the final results

Good response for the country.Over 60% goes to....

Posts : 214
Equity Stars : 415
Reputation : 1
Join date : 2019-07-16
Doesn't matter who comes to power. If its Gota it will be a big spike for a month.. If its Sajith, it will be a short dip. But, political stability is established, and all developments including port city will materialise.. markets will fly.. all the Rajapakse big boys will have to buy or they will miss out when foreigners start taking over..