» Power and Energy Sector
by KavinduTM Yesterday at 8:06 am

Posts : 1336
Join date : 2015-03-09
Collectors are just showing only a selling pressure. Understand this is the best investment at this boring situation. AAIC will help you to have a good portfolio, so better to invest here.

Posts : 1336
Join date : 2015-03-09
LONDON (Reuters): World stocks held near two-week highs yesterday as investors bet on a worldwide wave of central bank stimulus, with expectations building that the US and the euro zone may deliver interest rate cuts as early as July.

Markets have been fired up by European Central Bank President Mario Draghi’s Tuesday volte-face on policy easing. In one of the biggest policy reversals of his eight-year tenure, Draghi flagged more policy easing if inflation failed to pick up.

However, German and US bond yields which hit record lows and two-year lows respectively after the speech, inched higher to trade just off those levels. European shares too slipped off six-week highs, and Wall Street futures indicated a slightly weaker open.

Some of the trepidation is down to the US Federal Reserve’s ongoing meeting, with a decision due at 1800 GMT. It is widely expected to follow the lead of the European Central Bank and open the door to future rate cuts.

“It should be really clear to absolutely everyone that this is a monetary policy turning point... Those rate cut expectations have now shifted much closer,” said Commerzbank Currency and Emerging Markets Research Head Ulrich Leuchtmann.

“Of course the other question is: What is the Fed doing? If the Fed takes the fundamental risk of political pressure seriously, they cannot do anything today,” he said, noting that President Donald Trump’s strident calls for lower interest rates posed a dilemma for the Fed.

But market sentiment has been buoyed also by news that Trump will meet China’s Xi Jinping at the G20 summit this month, even though many doubt the two men can reach a breakthrough on ending their trade dispute.

MSCI’s global equity index rose 0.4%, adding to Tuesday’s 1% gain, as Asian shares excluding Japan followed the lead of their European and US counterparts to jump almost 2% – their biggest one-day rally since January.

All eyes are now on the Fed, with Chairman Jerome Powell holding a news conference after the announcement.

Futures are almost fully priced for a quarter-point easing in July and imply more than 60 basis points of cuts by Christmas.

As for Europe, markets have almost fully priced a cut in September, though some analysts, such as those at Germany’s Commerzbank, now say rates will be cut in July, rather than in the last quarter of the year as they had predicted earlier.

ECB sources told Reuters Draghi had flagged his measures so strongly that other board members would be unable to disagree with him at their 25 July meeting.

Yet all the clamour for easing creates risks policymakers will disappoint.

“Market expectations for a dovish shift are nearly universal, the only question seems to be the degree,” Blake Gwinn, head of front-end rates at NatWest Markets, said, referring to the Fed.

“Markets will be looking for validation of this pricing,” he added. “We think this represents a fairly high bar for the Fed to deliver a dovish surprise.”

BofA Merrill Lynch’s latest fund manager survey spoke volumes about the sea change in sentiment. It showed investors were dumping stocks and had upped bond allocations to nearly eight-year highs. They also had crowded into safe-haven US Treasury bonds and cash.

The prospect of more policy easing and worries for the growth outlook kept German yields close to the minus 0.33% record low hit on Tuesday, while Japanese yields sank to the lowest since August 2016 at -0.145%. Yields on the US 10-year note reached the lowest since September 2017 at 2.016%, a world away from the 3.25% top touched in November last year.

The fallout in currencies has been significantly less, mostly because it is hard for one to gain when all the major central banks are under pressure to ease.

The euro did pull back after Draghi’s comments, but at $ 1.118 it touched only a two-week low.

The dollar eased slightly on the yen to 108.3, but was flat versus a basket of currencies. The yuan touched three-week highs versus the dollar on the trade news.


REUTERS: Shares closed at a more than six-week high on Wednesday, boosted by foreign inflows into equities, while the rupee ended slightly firmer on dollar sales by exporters.  The benchmark stock index ended 0.31% firmer at 5,392.30, its highest close since 3 May. The bourse rose 1.61% last week, but has dropped 10.91% so far this year.

The economy picked up to 3.7% in first quarter 2019, government data showed on Wednesday. Finance Minister Mangala Samaraweera on Tuesday said the economy grew at 3.5% in the first quarter recovering from 1.8% in the previous quarter.

The Central Bank cut its key interest rates on 31 May to support a faltering economy as overall business and consumer confidence slumped following deadly bomb attacks in April.

Foreign investors bought a net Rs. 178.5 million worth of shares on Wednesday, first net buying in eight sessions. They have sold a net Rs. 522.6 million for the seven days through Tuesday. The year-to-date net foreign outflow is at Rs. 5.87 billion.

Analysts expect the rupee to weaken further as money flows out of stocks and government securities. The rupee fell 0.14% last week, but is up 3.39% for the year. Exporters had converted dollars as investors' confidence stabilised after a $ 1 billion sovereign bond was repaid in mid-January.

The rupee dropped 16% in 2018 and was one of the worst-performing currencies in Asia.

Foreign investors bought a net Rs. 311 million worth of government securities in the week ended 12 June, but the island nation's net foreign outflow was at Rs. 21.6 billion so far this year, Central Bank data showed.

Foreigners are buying shares and it will be a good sign!!!!!! 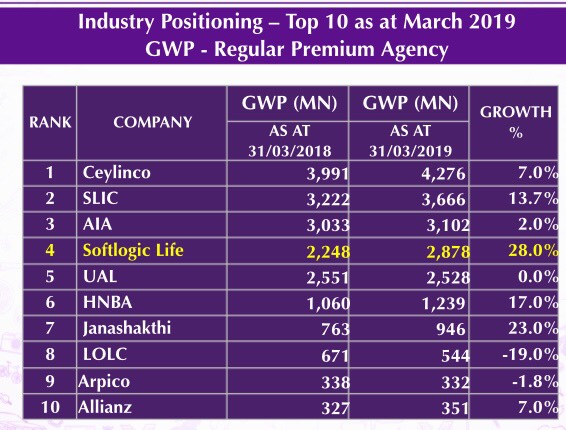 That is why I am telling you to buy AAIC. Future is the answer.

What a wonderful result.

Am I promoting AAIC?

I recommend to buy this to any one.

Popularity and honesty, they have won. People are gathering with them day by day.

You can see over 200 main branches around the country. In some towns, there are over 7 sub branches.

See the reality and invest!!!!!

yes. this is a very good share at the moment. Q results will be massive.

No shares to buy at any time, so this may reach above 50 soon.

You can see how AUL and HASU moving up.

But AAIC will move up fast because of less quantity.

March quarter 744m profit and JUNE quarter must be above 1 b profit.

Now it is going to move up with a huge profit.

Their growth is very fast as a result they even passed  AIA  and will be the leader of the sector soon.

Normally insurance companies are moving up very fast, you can see how insurance shares moving up.

Good performance and less quantity with a huge profit. What will be in future!!!

They have to collect over 700m for a month to achieve their aims. As a result the company will move up with the positive impact. I think now they have many other new business to reach up more than they expect.

So future is good. They why we feel worry to think of the moving up.

So understand the reality.

Now AAIC has come to the third place. And also it will pass other two companies within a few months and will be the leader in the sector.


Below 40 you are fully safe to invest.

Less quantity and much profit, what will do in future!!!!!


See as I mentioned earlier UAL and HASU have moved up.

I think AAIC will reach up faster than we think.

Best is to buy and hold, you will get a huge profit in short time and triple profit in long time.

I believe that AAIC will touch above 50 soon. Because its report is good and it has a huge profit and good management.

1000 reasons to move up. Still we can't see buying pressure but moving slowly. No shares to buy on the market.