Dear Ruwan or whatever your real name is,
Do you have any idea what forex Trading is? or do you know anything apart for calling CRAP, if not get some Idea before putting up your silly narrow mind into the world, go through wikipedia link: en.wikipedia.org/wiki/Foreign_exchange_market you will get some ******* I hope you understand, if not just call us we will explain you. 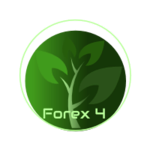 Posts : 80
Equity Stars : 1358
Reputation : 1
Join date : 2017-01-24
I dont know of the software you are trading but if you dont have an advisor please dont proceed to invest in that platform and more importantly you must be sure where you are depositing funds ( it may be a scam). It is not illegal to do forex trading in Sri Lanka, you need to declare your business and transaction intention with details of fund values to the central bank monetary board via a commercial bank.

Stock Trader
Posts : 2
Equity Stars : 408
Reputation : 0
Join date : 2019-05-28
Anybody do forex trading? I tried to do with etoro but according to bank,the Central Bank regulations money deposit using credit card debit card for money trading sites are prohibited.so I was not able to start training is forex trading prohibited in Sri Lanka Now?

@Charith10 wrote:Anybody do forex trading?  I tried to do with etoro but according to bank,the Central Bank regulations money deposit using credit card debit card for money trading sites are prohibited.so I was not able to start training is forex trading prohibited in Sri Lanka Now?

Freeforexsignals2020 alias Teller  will help you soon as possible.

After forum member Karuna, newly born babies are very hungry to know about the forex trading.

@Charith10 wrote:Anybody do forex trading?  I tried to do with etoro but according to bank,the Central Bank regulations money deposit using credit card debit card for money trading sites are prohibited.so I was not able to start training is forex trading prohibited in Sri Lanka Now?

Freeforexsignals2020 alias Teller  will help you soon as possible.

After forum member Karuna, newly born babies are very hungry to know about the forex trading.

Anyone know regarding below message???

The attention of the Central Bank of Sri Lanka (CBSL) has been drawn to the emergence of several unauthorized and unregulated online forex trading platforms/dealers. CBSL has further noticed that there are advertisements circulated in the print and electronic media, social media, internet and unsolicited e-mails by some companies to encourage the public to engage in such forex trading with the assurance of guaranteed high returns.
In the recent past, CBSL has come across instances and received complaints where several persons have lost their funds due to the above activities carried out by some individuals and companies.
The purpose of this notice is to draw the attention of the public to the following;
• In terms of the provisions of the Foreign Exchange Act, No. 12 of 2017 (FEA), Licensed Commercial Banks as Authorized Dealers (ADs) are permitted to deal in foreign exchange for current transactions and capital transactions subject to the Regulations and Directions issued thereunder.
• Accordingly, any other person in, or resident in Sri Lanka is not permitted to undertake forex trading transactions or remit funds outside Sri Lanka for such transactions and receive income or profit earned from forex trading.
• CBSL has not granted any permission for ADs to facilitate forex trading or transactions relating to forex trading on behalf of a person in, or resident in Sri Lanka.
• In this context, engaging in forex trading by a person in, or resident in Sri Lanka is a violation under the provisions of FEA.
• CBSL may take actions against both parties who encourage the public to engage in such forex transactions and persons who engage themselves in such transactions, in terms of FEA.
The public is strongly advised to refrain from engaging in such unauthorized forex trading transactions considering the above facts and the possible risk of losing funds.
Any information or complaints regarding such unauthorized forex trading platforms/dealers may be forwarded to the Director of the Department of Foreign Exchange of the Central Bank of Sri Lanka in order to take actions as stipulated in FEA. 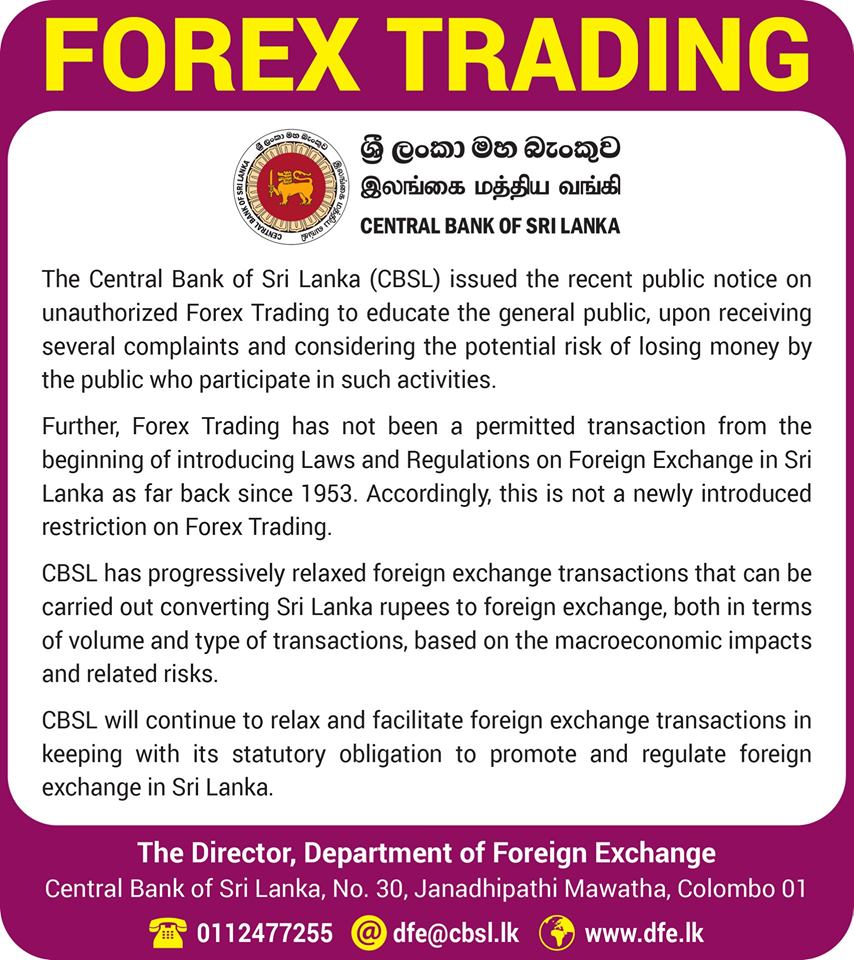 Similar way one subordinate of the big boss from Dubai, encouraging forex trade in Sri Lanka which is illegal in Sri Lanka. and using his different fake user ID /name in this forum, posting in support of forex trade.

Unsuspecting forum members will see lot of people are support for the forex trade or doing forex trade.
His fake ID including Freeforexsigals2020, Signals2020 and so many, but most of the ID's are belonging to this one person.


Another his modus way is to list shares from A to Z.
In due course some shares will go up and most will come down.


Then he will only select that shares that went up and claim himself as a share market prediction genius.
He won't talk about the most shares that went down, If any body pointed that, he will say I recommended that share at very low price level and now achieved that target level  through PV inners bullish around 95.87.

Earlier this was done by his best friend karuna.


Please remember that forex trade by common persons are illegal in Sri Lanka and If affected, difficult to take legal action against any fraudulent activity beyond the Sri Lankan boundaries and will lose your money.

Posts : 5349
Equity Stars : 15410
Reputation : 227
Join date : 2013-06-25
Location : Abhudhabi
Even lately , i was expecting this type of article from you . Foreign currencies exchange market is the biggest even so many sri lankans banks engaged with the market. You and central bank should understand the opportunies of this market & dont be a frog in a well. BOTH OF YOU SHOULD READ ,WHAT IS FOREX?

"Currencies are a popular investment class that allow for speculation on price movements, just like bets on other asset classes.

This gives the forex market its 24-hour operational characteristic. When trading in New York ceases, forex traders can trade in Sydney , then in Tokyo and later in the European centers before trading resumes in New York.

Currency is traded in the spot, forwards and futures markets, with spot trading now assuming prominence.

The futures and forwards market are the preferred choice for companies seeking to hedge their foreign exchange risk.

The appeal of the forex market lies in its copious liquidity, with a $5.2-trillion average daily trading volume.

Other, more exotic pairs such as USD/MXN (U.S. dollar/Mexican peso), which are rarely traded and therefore are relatively illiquid due to the low volume of trading — and therefore carry a high risk profile.

The high liquidity of the forex market vests gives it dynamic and rapid price movement, which creates multiple opportunities for retail traders.

Leveraging is allowed in forex trading, which means that investors do not have to spend the whole value of the investment, but can instead use only a margin amount. If a broker allows a 100-to-1 leverage, the investor would need to have an equity of $1,000 to fund an order worth $100,000. In this case, the margin requirement is 1 percent.

The price interest point, or PIP, is a term used to refer to gains or losses in trading, and is the smallest price move in an exchange rate. For currency pairs priced to four decimal places, one pip is equal to 0.0001 — or 1 basis point.

The price at which the market is willing to buy a specific currency pair is the ask price, and it appears on the left side of the quote. Alternatively, it is the price at which a trader can sell the pair.

This is the difference between the bid price and ask price, which is otherwise the cost of trade or the profit that goes to the broker. It is measured in pips.

How To Trade Forex
Here's a simplified explanation of how to trade forex:

Traders interested in the forex market must zero in on a currency pair on which they wish to bet. Before deciding the currency pair, traders should have a fairly good understanding about the associated risk.
Traders should then decide on the type of trading, namely forex trading, CFD or spread betting. Forex trading allows traders to buy lots in the unit of the base currency, which is the currency on the left side of a pair.
Depending on the direction of a bet, traders then decide to buy or sell. Logically, forex traders should be aware of the price of the currency pair, with the currency on the left designated as the base currency and the one on the right being the quote currency.
When traders buy a currency pair, it implies they are betting the base currency will strengthen against the quote currency. For every point rise in the exchange price relative to a trader's open level, a profit is made, while a drop nets a loss.
The sell bet suggests that a trader is betting on the weakening of the quote currency. In this case, a loss is made with every 1-point increase in the exchange rate — and a profit is made if the reverse occurs.
Once an order is placed — an instruction to buy/sell at a future point when a predetermined price level is reached — the order is open. With each move in the pair that's being traded, the profit/loss will fluctuate. Traders can keep a tab on the market price, profit and loss in real time. Fresh orders can be placed, orders can be attached to open positions and existing trades can be closed out.
Finally, when a trade is closed, the trader does the reverse of what they did at the time of the opening. If a buy order was placed, the trader now sells. When a tradeis closed, the net profit/loss now shows in a trader's account balance.
Another option is trading the CFD, or contract for difference. A CFD is a derivative instrument, and it is a contract executed between a buyer and a seller. The difference in the value of the underlying instrument between the time at which the contract was opened and the time it was closed is paid. There is no physical exchange of the asset class.
How To Make Money From Forex Trading
A Sound Education Is a Must

Knowledge is the key to success. Keeping up with this adage, traders should equip themselves with sufficient knowledge before deciding whether to plunge into the forex market. Apart from learning using demonstration accounts, traders should also learn the different factors that impact currency movements — geopolitical news, economics, monetary policy and the like.

Experts suggest that an uncluttered mind is needed for stress-free trading — and judicious decision-making. Traders should only commit funds they can afford to lose, without dipping into the money they need to sustain themselves. Start small.

Prudent decision-making is a sine qua none while trading a highly volatile instrument like currency. Acting based on sound logic and reason is key to avoiding excessive risk."
_________________

Posts : 1086
Equity Stars : 1817
Reputation : 27
Join date : 2019-06-20
Location : colombo
forex trading is a scam with no fundamentals. its just gambling giving 15% fee to house. better to go to turf accountant than forex trading. stupid people cought in to this trap. guys 20-24 yearr with no street smart will think them selves enterprenuers by forex trading untill there bank account become NIL