» how do i know my ipo application status ?
by Hitazz Today at 1:38 pm

» LOFC Direction
by Swissinvest Today at 10:09 am

» CLC - worth the Investment
by Swissinvest Today at 9:57 am

many suppliers should not do business with gvt exept nessesary servises. its fraud of our tax money.
approved if they do not get paid . gvt should only expend to develop roads and infrastructure

Jan 30, 2020 (LBO) – Monetary Board of the Central Bank has decided to reduce the Standing Deposit Facility Rate (SDFR) and the Standing Lending Facility Rate (SLFR) by 50 basis points to 6.50 percent and 7.50 percent, respectively.
Statutory Reserve Ratio (SRR), however, will remain unchanged at 5.00 percent.
The board said they arrived at this decision following a careful analysis of current and expected developments in the domestic economy and the financial market as well as the global economy.
The Monetary Board, at its meeting held on 29 January 2020, was of the view that it is essential that market lending rates reduce further in order to support the envisaged pickup in credit growth and economic activity.
“This decision supports a continued reduction in market lending rates, thereby facilitating the envisaged recovery in economic activity given the favourable medium-term outlook for inflation, which is well anchored within the 4-6 percent range,” the board said.
“The Central Bank will continue to monitor macroeconomic and financial market developments with a view to maintaining aggregate demand conditions at appropriate levels, in the period ahead.”

@reyaz wrote:There is a relationship or correlation between tax cut govt and torrent of trading with wave if not tsunami of trades. Similarly there is a correlation to Austerity meassures and wikunumsinghe government (UNP= Unwanted foreign iNfluence Party).

Hahah how did i miss this

i hope so too. Uptrend started last week. (those 2 days which was (-) by more than 50 points happened coz of corona. Even world markets were down.)

Hi Kavindu
TO still 77mn & index red.
Policy rate cut & indication from CBSL that they will not permit downward rate trend to be reversed should have resulted in market sold up move.
Disappointed.
Await your take.
Thanks

@Kipling wrote:Hi Kavindu
TO still 75mn & index up 2 points.
Policy rate cut & indication from CBSL that they will not permit downward rate trend to be reversed should have resulted in market sold up move.
Disappointed.
Await your take.
Thanks

Hi mate
It is fighting with virus case. Almost all Asia share markets down today. But CSE is still okay because of those (+) points.
People still scared. You know this virus case could go massive. But i believe it will be ended soon.
And we can expect a good uptrend sooner. Even today we can expect a good move. 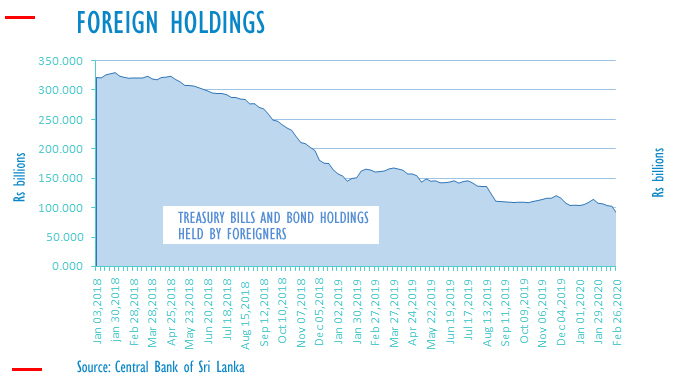 ECONOMYNEXT – Foreign investors continued to sell rupee bonds in February 2020, after a rate cut in January, with one of the steepest one week sell-downs taking place in the last week, official data showed as a Coronavirus outbreak also spooked global investors.

Foreign investor holdings of Sri Lanka rupee bonds fell to 91.2 billion rupees (about 50 million US dollars) in the week to February 26, from 102.66 billion rupees a week ago, central bank data showed.

Sri Lanka cut policy rates on January 30, despite the budget deficit expected to rise and private credit also expected to pick up in 2020.

Would government give free essential food to poor people in those closed days?

Previous 2bn Chinese loan reduced to 500 mn. Further
With current usd rates nearing zero we should have stricken a good interest rate.
But in no paper the interest rate of the loan disclosed.

Friday’s rate cut is the third cut for the year and the bank has reduced the rates by 100 basis points so far this year.
The Central Bank advanced its Monetary Board meeting to Friday and decided to reduce the Standing Deposit Facility Rate (SDFR) and the Standing Lending Facility Rate (SLFR) of the Central Bank by 25basis points to 6.00 percent and 7.00 percent, respectively, effective from the close of business on 03 April 2020.

“This decision will complement the measures taken thus far to ease market conditions, and enable the domestic financial market to provide further relief to businesses and individuals affected by the outbreak of the COVID-19 pandemic and restrictions placed to contain its spread within the country,” the bank said in a statement.

The Bank also said the Monetary Board may review the monetary policy stance of the Central Bank and make necessary changes as and when required in consideration of economic and market developments.

The Monetary Board in March at an urgent meeting reduce the SDFR and the SLFR by 25 basis points with effect from 17 March 2020 and reduced the Statutory Reserve Ratio (SRR) on all rupee deposit liabilities of licensed commercial banks (LCBs) by 1.00 percentage point to 4.00 percent considering the urgent need to support economic activity with the rapid global spread of the COVID-19 pandemic and its possible further spread in Sri Lanka.

The Central Bank of Sri Lanka slashed its standing deposit facility rate by 25bps to 6 percent at an emergency meeting on April 3rd, its second such reduction in three weeks, aiming to support the economy amid the coronavirus pandemic. "This decision will complement the measures taken thus far to ease market conditions, and enable the domestic financial market to provide further relief to businesses and individuals affected by the outbreak of the COVID-19 pandemic and restrictions placed to contain its spread within the country," the central bank said in its release. The standing lending facility rate was also cut by 25bps to 7 percent.

Does this mean banks will get more profits?

Apr 16, 2020 (LBO) – The Monetary Board of the Central Bank at its meeting held yesterday, having observed the cumulative reduction of the key policy interest rates of SDFR and SLFR by 200 basis points each since 31 May 2019, has decided to allow the bank rate to automatically adjust in line with the SLFR, with a margin of +300 basis points.

Accordingly, with effect from today (16th), the bank rate, which is an administratively determined rate that could be used in periods of emergency, has been effectively reduced by 500 basis points from 15.00 percent to 10.00 percent.

In practice the monetary authority injects large volumes of money to target an overnight rate in the middle of the corridor.

Sri Lanka’s private credit is expected to fall amid the shock of Coronavirus lockdowns but state credit is set to expand.

A key problem with Sri Lanka’s monetary policy is not so much the rate but a recent practice of targeting the middle of the policy corridor with large volumes of excess liquidity, which leads to bouts of monetary instability, analysts have said.

Large volumes of excess liquidity is required to target the middle of the policy corridor when there are spikes in credit demand, leading to uncontrolled expansions of the monetary base, out of sync with the balance of payments.

The central bank’s earlier rate cuts starting from January as credit was starting to pick up slightly, liquidity injections from February, triggered pressure on the currency and has helped the country earn a credit downgrade as fears about external sustainability increased.