(For Expert Members only)

» What will happen tomorrow?
by DamithAsian Today at 12:05 pm

» TOURISM INDUSTRY
by judecroos Today at 10:49 am

» Crypto , Digital Currency Trading , Forex
by kasun_gimhana Today at 9:43 am

» Is now a good time to invest in real estate?
by CHRONICLE™ Today at 7:22 am

» MillenniumIT ESP
by sachinthana87 Today at 5:33 am

interesting discrimination in the HJ group that BALA doesn't seem to have taken the gratuity provision while MADU has taken it, question is what are they trying to cook up there?

@windi5 wrote:WATA is also in loss. Results will be same for others as well,HOPL,ELPL,KOTA,NAMU,BALA,MADU,.

Actually Namu did make a loss this quarter, RICH kind enough not to take their management fee for the quarter. That's the only reason they ended in green.

interesting discrimination in the HJ group that BALA doesn't seem to have taken the gratuity provision while MADU has taken it, question is what are they trying to cook up there?

Interestingly KGAL & NAMU did a one off payment for this right? But HOPL is dragging this down to 2012 even so their revenue growth is likely to be hit by this for several qtrs ahead ;( So to overcome they'll have to increase production at least..

"The collective agreement between the Regional Plantation Companies and Trade Unions was signed on 6th June 2011 and wage increase was effective from April 2011. Arrears of wages amounting to Rs.32.11 Million has been recognised in respect of the above period. Additional increase in gratuity provision due to wage increase will be approximately Rs.50.53 Million out of which Rs.5.05 Million has been charged for the month of June'2011 and the balance amount of Rs.45.48 Million will be charged during the period July 2011 to March 2012."

@Hawk Eye wrote:KVAL Financials for the 9 months reports an EPS 8.05.

I think this is wrong,

Why do you "think" that it's wrong? 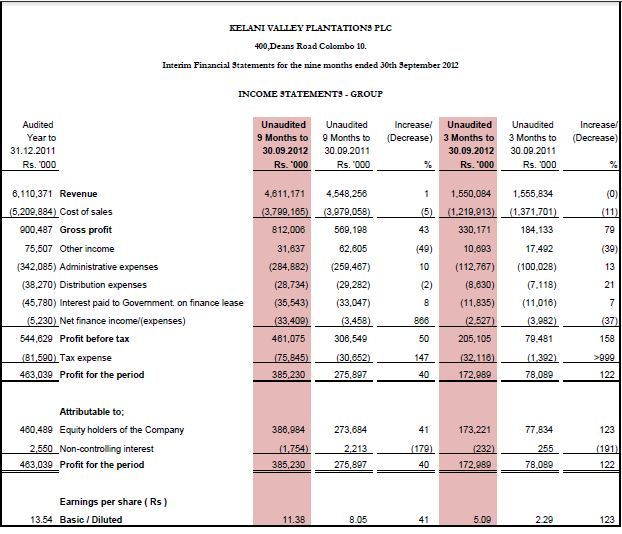 Last 9 month rubber made a 37% gross profit margin and tea is only made 11% margin. However tea contribute around 76% to the revenue. This shows high profitabilty in Sri Lanka rubber sector.

Rubber revenue has declined by 300Mn for nine month. Otherwise profit hasbeen increased much more than this.

Dip in tea prices a worry; crop shortfall narrows
Recent auctions in Colombo have witnessed a significant downward trend in prices for Low Growns, causing a fresh round of concerns for the tea industry.
According to John Keells Ltd., averages have been plummeting steadily from Rs. 452 at sale No. 38 of 25/26 September 2012 to Rs. 407.31 at the recently-concluded sale No. 41 of 16/17 October 2012, which reflects a drop of Rs. 45 in four sales.
“High priced Tippy teas which feed the Iranian market have come under severe strain with prices dropping significantly in comparison to the Leafy teas,” the produce broker said.
It is reported that the European Union Government which had met in Brussels on 15 October 2012 had decided to enforce further financial and trade sanctions on Iran with the exception for humanitarian trade. In addition to the extensive trade and financial sanctions already in place the new sanctions will add more pressure on the Iranian economy.
John Keells said tea imports to Iran are expected to continue at least during the current winter months, but with the local currency recording a sharp fall in value, customers will be compelled to pay higher prices as importers will find it difficult to acquire letters of credit and transfer of funds.
“The situation in Syria remains much the same as reported earlier, which is another area of concern, particularly for the Low Grown Leafy teas, which have also not fared too well. Given the present scenario, the immediate prospect for a quick turnaround does not look promising, particularly in view of the fact that present winter buying for Russia, which props up the market at the this time of the year, will cease in a few weeks time,” John Keells said. “This could further weaken demand for Low Grown teas,” it added.
In a more positive development, the tea crop in September saw an increase to 26.82 million kilos, from 24 million kilos in the corresponding month of last year. This reduced the year-to-date deficit in the crop to 1.3% to 241.7 million kilos as at September from a deficit of 3% as of end August. In the first nine months of last year the crop was 245.1 million kilos. It is the second consecutive increase year on year following August.
Low Grown saw the biggest increase in crop in September, up from 15.6 million kilos in September last year to 17.9 million kilos this year. This saw cumulative Low Grown crop at 149.4 million overtake more convincingly the last year’s first nine month total of 147.3 million kilos.
High and Medium Growns saw modest increases as well. CTC production too improved.
In the meantime Ex-Estate teas over the past few sales have held their own, maintaining steady price levels. BOPs have met with better demand over BOPF due mainly to the small quantities on offer, the broker said.
Last week Ex-Estate teas auction met with good demand. The Best Western High Grown BOPs were irregularly lower at the commencement of the sale, however appreciated as the sale progressed, whilst the others too were firm to dearer.
BOPFs too, which was initially Rs. 5 to Rs. 10 dearer, gained further as the sale progressed. Nuwara Eliya BOPs declined sharply by Rs. 40 to Rs. 50 with a number of invoices remaining unsold. BOPFs were firm to dearer. Uva BOPs were firm to a little easier, whilst BOPFs appreciated Rs. 15 to Rs. 20 and more at times. Low Grown CTC PF1s were mostly firm, whilst High and Medium types were firm to easier. Best Low Grown BP1s maintained; others tended lower.

Stock Trader
Posts : 4
Equity Stars : 1839
Reputation : 0
Join date : 2015-11-25
Kelani Valley Plantations PLC is a diversified agribusiness company with interests in production, processing, marketing, plantation crops and hydropower generation. The principal activities of the Company are the production and processing of tea and rubber. The Company's segments are Tea, Rubber and Others. The Company's core business interests are in tea and rubber, with a portfolio of approximately 30 estates covering over 13,000 hectares of both tea and rubber plantations, which are cultivated on lands that are leased from the Government of Sri Lanka. It produces traditional Ceylon Tea at approximately 10 tea processing centers. In latex rubber business, it manufactures sole crepe, centrifuge latex and crepe rubber, which are used mainly as raw materials in the manufacture of rubber gloves, and in pharmaceutical and shoe industries. The Company produces sole crepe in Sri Lanka with manufacturing operations being carried out at rubber factories situated in Yatiyantota and Dehiowita.

@kanishkaecomm wrote:
Why don't you tell us those reasons?