» EPF attack plans by Cabraal
by MoneyLover Today at 8:50 pm

» SEC to take measures to support the stock market
by Quibit Today at 8:21 pm

» CSE should be closed temporarily
by God Father Today at 8:04 pm

» Summary of Rules and Guidelines for Corrective Waves Zigzag
by evapattern Today at 7:38 pm

» Price band for individual stock at CSE
by MoneyLover Today at 7:00 pm

» Why are Sri Lankans continuously loose money in the stock market
by Quibit Today at 1:28 pm

» Sri Lanka Rupee Exchange Rate
by Quibit Today at 10:45 am

» SAMPATH BANK has postponed ANNUAL GENERAL MEETING. What will happen to the XD date?
by bhanu Today at 8:15 am

» MINIMUM rate of return you expect from the CSE equity portfolio
by Optimus Prime Today at 5:02 am

» What will happen tomorrow?
by bhanu Yesterday at 8:19 pm

» Govt to Refund 20% of EPF Contribution to Members
by God Father Yesterday at 5:01 pm 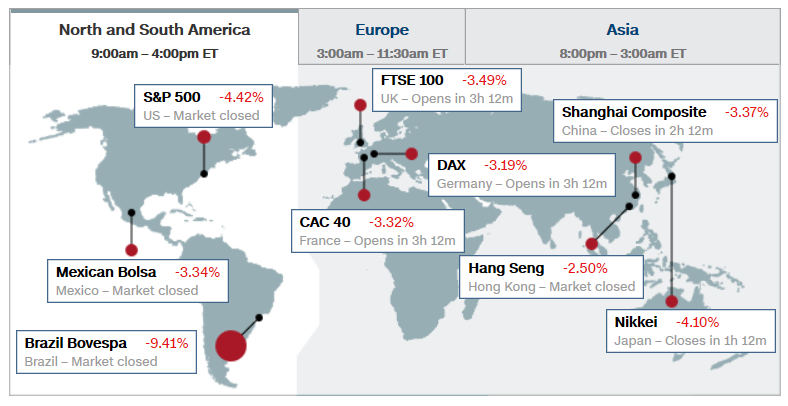 Pandemic fears pushed markets off a precipice last week, wiping more than $5 trillion from global share value as stocks cratered to their steepest slump in more than a decade.

The sheer scale of losses prompted financial markets to price in policy responses from the U.S. Federal Reserve to the Bank of Japan and the Reserve Bank of Australia.

Futures now imply a full 50 basis point cut by the Fed in March while Australian markets are pricing in a quarter-point cut at the RBA's Tuesday meeting.

In equities, Chinese shares opened higher with the blue-chip index (CSI300) up 1.5%.

MSCI's broadest index of Asia-Pacific shares outside Japan (MIAPJ0000PUS) advanced 0.4%, turning around from a loss of about 0.3% earlier in the day.

Despite some stability in the market, analysts still expect volatility to persist.

"Any signs that new cases are beginning to taper could be seen as a positive catalyst for the market especially given that some of the market complacency has reduced with equity valuations much lower vs few weeks ago," Nomura analysts wrote in a note.

"In the very near term until 1Q reporting results, we expect Asian equities may remain quite volatile," they added.

"However, on a medium term basis we believe the risk-reward is now getting favourable, assuming the virus does not take the form of a virulent global pandemic."

Leaders in Europe, the Middle East and the Americas rolled out bans on big gatherings and stricter travel restrictions over the weekend as cases of the new coronavirus spread.

The epidemic, which began in China, has killed almost 3,000 people worldwide as authorities race to contain infections in Iran, Italy, South Korea and the United States.

Both official and private surveys, released on Saturday and Monday respectively, showed China's factory activity collapsing to its worst levels on record as the virus crippled broad areas of the economy.

"It is now highly probable that the coronavirus will spread globally," Citi analysts said in a note.

"Financial markets may over-react until they have visibility on the actual impact."

In currencies, investors sought shelter in the Japanese yen, which jumped to a 20-week high on the dollar in tandem with the massive shift in money markets to price U.S. rate cuts. [FRX/]

All of this leaves just about every major asset class on edge and few analysts sounding optimistic.

"So it was right not to 'buy the dip,'" said Michael Every, Rabobank's senior strategist for the Asia-Pacific.

A further set of manufacturing surveys from around the world due later on Monday will provide investors more detail on the virus' impact on the global economy.

Later in the week, central bank meetings in Australia, on Tuesday, and Canada, on Wednesday, will be closely watched. 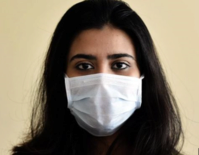 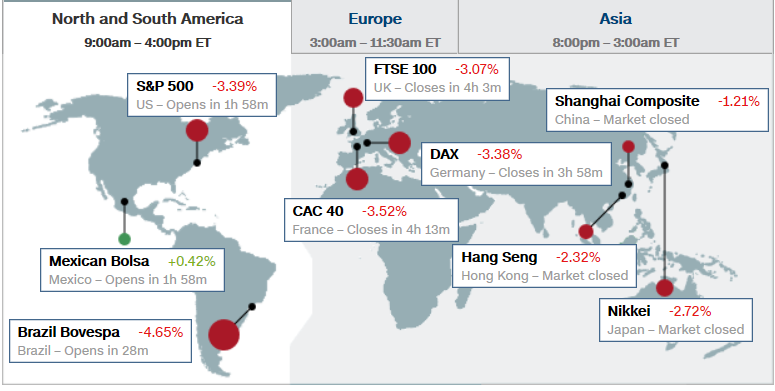 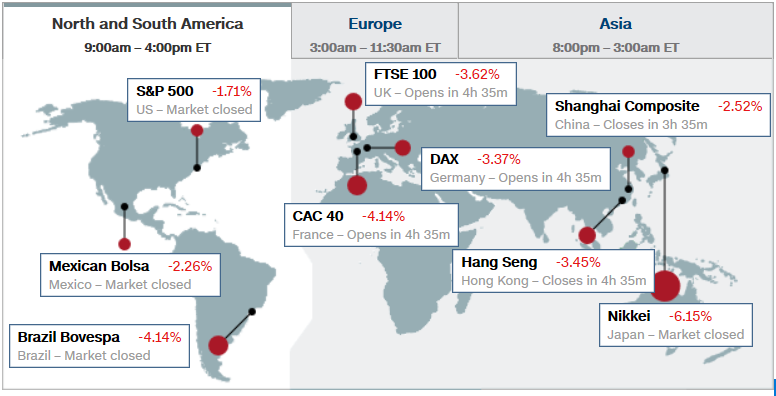 What will be CSE tomorrow

Anyone knows what was the biggest drop in cse in history within a day..

Posts : 26
Equity Stars : 199
Reputation : 1
Join date : 2019-10-23
While U.S. investors are grappling with a violent sell-off as the coronavirus spreads, their Chinese counterparts at the heart of the outbreak are back to making decent money again.
China’s swift and strict measures to contain the virus, optimism over fiscal and monetary stimulus, and relatively reasonable valuations are among the key reasons for the recent relative rebound, according to market participants. Perhaps more importantly, China investors have already gone through the panic stage that their U.S. counterparts are experiencing now, they said.
A gauge of Chinese stocks in Shanghai and Shenzhen just posted its best week in a year -- a 5% gain -- after touching a two-year high on Thursday. Meanwhile, the S&P 500 Index has fallen more than 12% from the record it reached last month, with volatility surging.
“It is interesting that China has started to outperform world equities since the start of February as confidence grows that it has passed the worst in terms of the virus, while concerns grow that the number of cases will surge elsewhere,” said Jefferies Financial Group Inc. strategist Christopher Wood, who recommended increasing China share weightings this week. “This market action also raises the hope, at least, that investors will look through the likely horrible first-quarter Chinese data.”
Here is a look at some of the drivers of the U.S.-China divergence:
Virus Containment
With a string of drastic measures including putting entire cities under lockdown and controlling people’s movements, new infections have dropped significantly in China, yet are only beginning to climb in the U.S. As of Thursday, the number of coronavirus cases in the Seattle area jumped by 20, and 11 more New York state residents were confirmed to be infected.
“China has been able to contain cases, while the situation in the U.S is still unknown,” said Alex Wong, director of asset management at Ample Capital Ltd. “If they do the same procedures as in China, it will be a huge disaster to the economy, so people are trying to stay away from U.S. stocks.”
Investor Sentiment
To Wong, U.S. stock investors are still in the early stages of reacting to the virus outbreak. They have just passed the period of across-the-board panic selling, and may soon focus on picking up stocks that are less impacted by the epidemic, as was the case in China and Hong Kong, he said in a telephone interview.
Wong has been buying shares in U.S. medical-equipment companies and video-game developers.
“We are in a different situation, people here have already been betting on stocks related to the ‘life-returns-to-normal’ theme, but they remain very uncertain about that in the U.S., and that’s why we are seeing this divergence,” he said.
Stimulus Measures
To Andy Wong, a Hong Kong-based fund manager at LW Asset Management, China’s quick stimulus measures have fueled the outperformance of the nation’s equities, while the Federal Reserve’s emergency rate cut only reminded U.S. investors how much they had underestimated the scale of the problem.
A succession of policy-easing measures has ensured ample liquidity in China’s markets, with a measure of interbank borrowing costs tumbling to its lowest in almost a decade. Investors have also bet on infrastructure shares in the hope of further fiscal stimulus.
Cheap Valuation
Valuation may also be part of the reason. The CSI 300 Index’s fell to a one-year low of 10.6 times profits projected for the next year in February, after the initial reaction to the outbreak virus hit China’s markets. Meanwhile, U.S. equity valuations dipped to about 16.6 times estimated earnings, according to data compiled by Bloomberg.
Skeptics Remain
Still, some remain skeptical about the outperformance of Chinese equities. Hao Hong, chief strategist at Bocom International, sees China’s A shares eventually catching up on the downside to their U.S. peers.
“Logically speaking, how is it possible that the center of the epidemic got hurt less than somewhere else?,” Hong said. “The effectiveness of these stimulus measures is very limited at this moment -- how could these infrastructure projects start when workers still haven’t returned to work?”
https://finance.yahoo.com/news/china-stocks-handily-beating-u-021734794.html

Posts : 243
Equity Stars : 1343
Reputation : 9
Join date : 2018-01-28
Asian markets start the recovery as corona start the downgrading in asia
this is the time to hold and collect for long term
Dont get trapped and sell off at this time

Yeah but still India and SL markets are bleeding. Will recover soon.

@kalu351 wrote:Asian markets start the recovery as corona start the downgrading in asia
this is the time to hold and collect for long term
Dont get trapped and sell off at this time 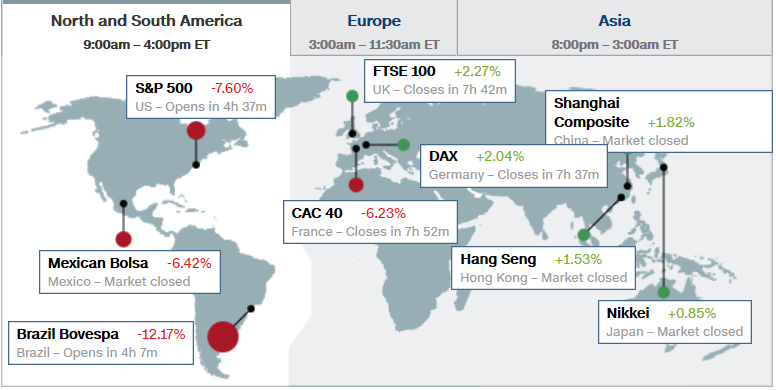