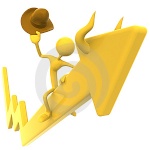 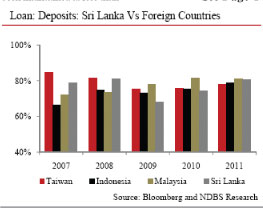 The country’s banking sector has lent out almost 90 percent of its deposits, making its loans to deposit ratio one of the highest in the region, a research report released by NDB Stockbrokers said.

"The loan: deposit ratio of the Sri Lankan banking sector has significantly increased from 2009 onwards as the growth in loans exceeded the growth in deposits. It is clear that the exceptional loan growth in 2010 and 2011 was facilitated by excess liquidity accumulated in 2009 (the loan book contracted that year while the deposit growth was intact), the research report titled ‘Safe haven among equities’ said.

"The loan: deposit ratio among regional banks has been maintained at less than 80% in the recent past. Even the Sri Lankan banking sector has not allowed the ratio to increase beyond 80 – 85% in the past. However this is mainly due to the high deposit base of foreign banks operating in Sri Lanka, since the ratio is currently over 90% for most local banks. Accordingly the loan growth should be controlled over the next 3 years in order to maintain the loan: deposit ratio under 80%. An increase in the ratio close to 100% would destabilize the industry, as was seen during the East Asian financial crisis in 1997 – 1998.

"The rapid economic growth witnessed in the country will result in strong demand for loans over the next few years.

We estimate the banking sector loans to grow by over 18% p.a on average over the next 3 years. The demand is likely to be most prominent from Small and Medium Enterprises (SME), Pawning and Long-term Project Financing segments. The growth would be reflected in the profitability as well since we expect the Net Interest Margins (NIM) to be healthy at around 4.5%-4.7% while cost: income and loan loss provisions are expected to be stable," NDB Stockbrokers said.

"While the non-performing loans may increase in the short term, it is likely to stabilize at an acceptable level of around 3% by 2013H2. The majority of assets in the sector are maturing within 3 months and therefore the liabilities are adequately matched with assets in terms of their respective maturities. In addition over 20% of the assets in the sector are liquid. Approximately 90% of the deposits of listed commercial banks are lent as loans, and we expect the percentage to reduce with the reduction in credit growth in 2012. Therefore in our opinion the overall risk exposure of the Sri Lankan banking sector is low.

"The capital adequacy requirements are likely to be further intensified in the future (with the introduction of Basel III). This may have a negative impact on the Returns on Equity (ROE) of the sector, particularly if the banks tend to raise equity instead of (less costly) tier II capital. Raising excessive equity capital could hamper the demand for banking sector shares and restrict the upward potential of the share prices.

"Attractive risk adjusted returns could be expected by investing in the sector due to the relatively low risk and steady profits estimated over the next 3 years.

"Historically the deposit growth in the banking sector has been relatively stable at around 17%p.a. This is in contrast to the loan growth which has shown a tendency to fluctuate significantly in the past.

"The Central Bank liberalized the acceptance of deposits by domestic banking units of commercial banks from foreigners introducing a new scheme, "Foreign Investment Deposit Accounts (FIDA)" in mid 2008. However we have not witnessed an increase to the long term sustainable growth in deposits of 17%p.a.

Accordingly we expect the banking sector deposit growth to remain at the 15 –20%p.a range over the next 3 year time horizon.

"A clear trend is seen in the relative slow growth in the low cost deposits (current accounts and savings accounts) compared to the growth in total deposits. As a result the CASA ratio (current accounts and savings accounts as a percentage of total deposits) has been steadily decreasing since 2010. This could be because the deposit holders seek higher returns by allocating funds to time deposits and other modes of investments.

"A continuation of this trend is likely to increase the cost of funds of the banking sector. However the interest margins may not get affected if the lending rates are also increased. Further a possible reduction in market interest rates in the future could reduce the appeal of time deposits to investors and improve the growth of low cost deposits."
http://www.island.lk/index.php?page_cat=article-details&page=article-details&code_title=64350