Sri Lanka's economic growth in 2017 and 2018 will be constrained by tight fiscal and monetary policies under the International Monetary Fund (IMF) program and private investment will have to play a primary role in maintaining economic growth, the Asian Development Bank (ADB) says.
The economic growth slowed in 2016 to 4.4% with a marked fall in agricultural production weakened by the adverse weather, but a pickup in construction and investment helped to sustain growth while the inflation was highly variable over the year but moderated in general, as was the current account deficit.
The outlook is for modest recovery in growth as the government implements an economic program of fiscal reform to tackle persistent macroeconomic imbalances and a large public debt.
The ADB in its latest Asian Development Outlook 2017 projects Sri Lanka's economy to grow 5% in 2017 and 2018 while the inflation to be maintained at 6%. 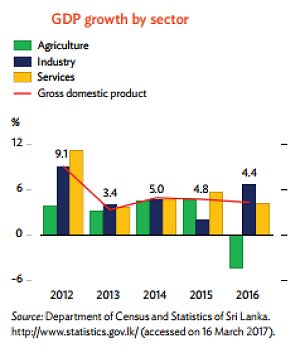 Raising the country's very low revenue ratio is the major priority of fiscal consolidation under the IMF program. However, the higher VAT introduced in 2016 and improved income tax collection in 2017 will depress consumption, outweighing the positive impact of a modest increase expected in worker remittance earnings, the ADB report says.
The goal is for total revenue to equal 15.0% of GDP in 2017.
Private investment is expected to continue to expand modestly in 2017. While monetary tightening has slowed the expansion of credit to the private sector, credit for productive purposes would be available even with the boost in policy rates announced in March 2017.
"However, further monetary tightening in response to adverse developments cannot be ruled out in 2017," the report noted.
Faster growth expected in the major industrial economies should lift export performance, but this will be offset to some degree by higher oil prices.
On balance, GDP growth is expected to edge up to 5.0% in 2017, the rate maintained in 2018 with further consolidation reform.
The government projected a budget deficit equal to 4.6% of GDP in 2017, down from 5.6% estimated for 2016.
Inflationary pressure from the higher VAT and modest depreciation of the rupee in the second half 2016 will add to the inflation expected from slightly higher import prices. Accordingly, average inflation is projected at 6.0% in 2017 and 2018.
External demand is expected to recover gradually in 2017 and 2018. Exports are projected to grow by 4% in 2017 and 5% in 2018 on the bases of gradual recovery of global demand, the renewal of concessions under the Generalized System of Preferences Plus, the removal of the European Union ban on fish imports, and the possible finalization of several free trade agreements.
A larger services surplus will be driven by continued rapid expansion in tourism over the next 2 years. Worker remittances are expected to increase at a moderate pace. 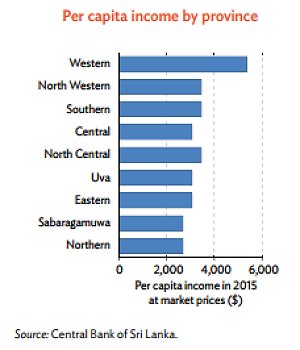 The ADB report says despite reaching per capita income close to the upper-middle-income threshold, Sri Lanka persistently relies on a narrow manufacturing base.
Exports are still 60% apparel and tea, and worker remittances remain a major source of foreign currency earnings. Since the end of the civil conflict in 2009, Sri Lanka has not attracted much foreign direct investment in manufacturing that could diversify manufacturing and exports, according to the report.
Also important is to expand economic activity beyond Colombo and Western Province. As of 2015, Western Province, one of nine provinces, produced 41% of GDP. Further, per capita GDP in Western Province is about 1.4 times higher than in other provinces, underlining the need for regional development to make economic growth more inclusive.
The government has recognized the importance of diversifying the export base and the government has taken up economic corridor development as a policy instrument to promote economic growth and address geographic imbalances.

However, for the implementation of economic corridor development to succeed, ADB says it is imperative to identify new industrial clusters with future growth sectors and nodes along the corridors.